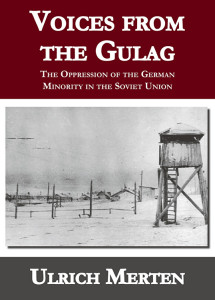 The story of Russia’s Germans has attracted many writers over the years.  With numerous scholarly treatments, however, has come a kind of fragmentation along with a need for updates as well.  Merten’s work, Voices From the Gulag,  here succeeds in speaking forcefully to both gaps, if they can be called that.  It provides an excellent overall recall of German beginnings in Russia (certainly details can be forgotten), describing a successful venture of development and growth, but sadly also a very tragic lengthy postlude, the Soviet period of suffering and repression. The ending, though, can be read as a hopeful note for future life in Russia and recovery for those hundreds of thousands who emigrated to start a new life elsewhere.  Any future general study of Russian history certainly will need now to have Merten’s work on hand, or else the story of Russia’s Germans will be truncated.

The greater part of Merten’s Voices from the Gulag is devoted to hands-on historical documents. It is a fascinating jigsaw puzzle in all its dynamism – a trip through time. This bare-bones narrative will be an eye-opener to anyone interested in German history. These are authentic voices that speak to us of a tragedy that is not all so distant, but is nevertheless poorly known.

Merten’s gulag voices are those of Germans in 1763 invited by Empress Catherine the Great to tame Russia’s vast steppe. Unable to understand his guests, the Russian peasant derisively dubbed them “Nemtsi”,  from the root word “nemet”, meaning tongue-tied or mute. That term has stuck and is still embedded in official Russian parlance.

Catherine’s well-intentioned venture-initially a success-floundered in the next one and one-half centuries under succeeding monarchs. It eventually spiraled into a Soviet-style abyss of isolation and repression for a once welcomed people. With an utter sense of irony, Merten chooses a title that totally belies the misnomer that the Nemtsi were mutes. With a wealth of documented eyewitness accounts scattered around the globe, he lets the victims expose a little known episode in history to the light of day. This work engages the reader. It is a “must-read.”

This remarkable history not only concentrates on the cruel period of repression that was suffered by all German Russians in Russia during the Soviet era but is also a complete outline history of the whole story of Germans in that country from the earliest days of the Czars to the present. Otherwise stated, it could serve as a one-volume recapitulation of the principal events of their experience and history. Also, the book is well written and quite enjoyable reading, if one can say that about such a dismal picture of mistreatment and cruelty as is the main topic, especially in the Stalinist era. The story is brought up to the present day with the massive movement of many GRs back to Germany and, earlier, to the West. A complete bibliography of works on the topic is also found at the end of specific topics and chapters, making further research very accessible.

The strongest sections of the work are on the WWII and postwar period, ending with final thoughts on the German Russian experience in history, life and death in the gulag, working and surviving the Trudarmya labor camps, the chapter on the terrible repatriation of German Russians, who had found refuge in the Reich as the Nazis retreated, and were forced back to the USSR in accord with the shameful giveaway by allied leaders in the Yalta agreements and other chapters stand out in the reader’s mind at the end. But, mainly, this is an excellent reference work which should be in any collection or library, whether of German Russians or any other history buff.

The author, an American who is not a German Russian himself, is a history specialist whose main career was as an international banker and senior executive of the bank of America working in the Americas. An earlier book concerning his interest in the German history, “Forgotten Voices: The Expulsion of the Germans from Eastern Europe after World War II” was a great success, as well.

This brief book review can hardly do this comprehensive and detailed study full justice. Author Ulrich Merten probably has produced the only compendium in English that tells the whole story of German colonization in Russia from beginning to end, when a large portion of the ethnic group returned to the historical homeland of Germany. Adam Giesinger’s 1974 classic study might come closest to this sort of coverage, but his research appeared more than a generation before the collapse of Soviet Communism. Although the early chapters of the saga of Germans in Russia often portray opportunity, determination, and accomplishment, the final stages increasingly point to loss, disappointment, struggle, terror, dislocation, and even mass death, both cultural and physical. Within the first twenty-five pages, Merten outlines the origins of German settlement in Russia beginning with Tsarina Catherine the Great’s Manifesto in 1763 to lure Christian foreign settlers as counterweights to the Islamic Turks still in charge well north of the Black Sea. Managed in Volga River settlement patterns by the Tutel-Kanzlei, attention turned to Catherine’s victory over the Crimean Khanate with positioning of Mennonite settlers from 1789 onward along the northern Black Sea rim. Tsar Alexander I, the grandson of Catherine, with a new invitation in 1804 reiterated this initiative. A third Russian settlement region was Volhynia when in 1831, more especially after 1863, Russia gained territory from the partition of Poland in 1793. In the latter instance, it was not the tsars but Polish and Russian landowners who brought in Germans to lease and eventually buy their land. Thus by 1860 there were some thirty-five German villages in Volhynia housing around 5,000 Germans; by 1871 there were 139 villages and a population of 28,000. Much of the information in Chapter Two about settlement life from 1763 to 1871 the author compiled from material easily available in English-language publications like Adam Giesinger, Fred Koch, Johannes Phillips, and others. Because Russian estate owners were unable to work their land without serfs following their freedom in 1861, Germans were able to acquire about 34 million acres by the outbreak of the First World War.

Tsar Alexander II on June 4, 1871, revoked privileges that had been granted to the German colonists by Catherine and Alexander I. This followed the abolishment of serfdom in 1861 and was meant to integrate the Germans into the civil patterns of the Russian Empire. Freed serfs often could not acquire land that had been offered, so Germans bought it, causing resentment. Losses by the Russian Empire in the Crimean War of 1853-18561ed to the draft of twenty-year-olds regardless of promises, which riled the Germans. Over time, the Pan-Slavic movement promoted by the nobility and intelligentsia after unification of the German Empire in 1871 cast a spell of suspicion of a front-line spy action by the German settlers. Abolishing the Kontor and Fürsorgekomite care-giving units left the Germans at the mercy of the local zemstvos (participatory local government units), which the Russian citizens could control by their majority votes. As a result, German colonists between 1873 and 1914 emigrated not back to Germany but to the United States, an estimated 300,000 in all, not to mention similarly large numbers to Canada and South America. Of those thousands of additional Germans who did not emigrate, many served in the military during the Russo-Japanese War of 1905 and especially during the First World War, when as many as 250,000 German settlers fought for Russia, not necessarily against the Fatherland but especially against the Turkish forces in the Caucuses and elsewhere. Nevertheless, deportations began during this conflict when some 150,000 Germans from Volhynia had their lands expropriated as they were deported to Siberia. Deportations from the Volga between 1914 and 1917, though planned, were not executed. Between 1918 and 1929 some 300,000 Germans fell victim to revolution and famine. Granted, they had an autonomous Soviet Republic on the Volga first in 1921 and more permanently in 1924. Most devastating, however, was Stalin’s five-year plan to collectivize agriculture from 1929 to 1931. Ranked as anti-revolutionary, the wealthy Kulak German farmers were exiled to Gulags or simply shot, some 50,000 in all from a German population at the time of 1.24 million. In 1932-1933 the famine was repeated, accompanied by an anti- religion and anti-German-schooling campaign. Following these measures came Stalin’s purges in 1937-1938, intensified as Stalin grew ever more suspicious of the rising Nazi Germany.

Although about 500,000 Germans were brought home from Volhynia and other sites following the outbreak of the Second World War in September 1939, the main deportations within the Soviet Union occurred only after the Nazi invasion of Russia in June 1941. While many scholars have likewise told this story, Merten’s book is very worthwhile with a succinct summation backed by multiple diary and personal narratives by the Gulag deportees about their experiences in the Trudarm’ya-forced labor camp. The net result was the destruction of the German culture in the Soviet Union. Details about the German army over-running the Ukrainian Black Sea region with the eradication of the Jewish and Gypsy populations by the Einsatzgruppen are mentioned. Likewise covered are the retreating German armies, which assisted with the relocation of many to the shrinking German Reich in 1944. Following the war, though, many German refugees from the wartime evacuations were repatriated under Operation Keelhaul to the Soviet Union and into the Gulags. Following special considerations worked out by Chancellor Konrad Adenauer with Moscow in 1955, some were returned to West Germany. Most continued their lives in special settlements and exile, however, until the dissolution of the Soviet Union in 1991.

The Soviet census of 1979 indicated that most of the 2,038,000 ethnic Germans in the country were no longer truly conversant in German as their mother tongue, but rather with Russian. Even though feeble attempts were made to restore an autonomous German republic in the country, once Gorbachev lifted restrictions on emigration from the Soviet Union in 1987, an exodus proved the way forward for the Germans in Russia. By the year 2005, some 2,332,500 Germans had moved from the former USSR to the Federal Republic of Germany, leaving, for example, only a small 30,000-strong autonomous German settlement at Altay Kray. Thus the German presence in Russia effectively ended.